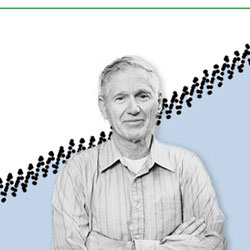 The American Chemical Society will designate the Keeling Curve – a long-term record of rising carbon dioxide in the planet’s atmosphere – as a National Historic Chemical Landmark in a ceremony June 12 on the Scripps Institution of Oceanography, UC San Diego campus.

In March 1958, on a remote mountain slope at a newly established U.S. Weather Bureau observatory, the late Scripps geochemist Charles David Keeling began taking measurements of carbon dioxide in the atmosphere. In the years that followed, the systematic measurements Keeling started have become the most widely recognized record of mankind’s impact on the earth, linking rising levels of carbon dioxide from human burning of fossil fuels to the warming of the planet. Keeling died in 2005.

The work of Charles David Keeling and the partnership that he formed with NOAA continue today. Keeling’s son Ralph Keeling now leads the Scripps CO2 Group. The Mauna Loa site is among 10 locations from the South Pole to Alaska at which air samples are regularly collected in flasks for analysis for the Scripps CO2 Group.

The ceremony to unveil a plaque marking the National Historic Chemical Landmark designation will take place at 11:45 a.m. at Ritter Hall on the Scripps campus in La Jolla, Calif., the site of Keeling’s lab, where the current Scripps CO2 Group operations continue today.

“This plaque is a great tribute to all the people who worked tirelessly over the years to sustain these detailed measurements,” said Ralph Keeling. “The Mauna Loa CO2 record changed how we view the world. It proved for the first time that humans were altering the composition of air globally, and it thereby legitimized the concern over human-caused climate change.”

“The Keeling Curve is an icon of modern climate science,” said Thomas Barton, PhD, immediate past president of the American Chemical Society. “Dave Keeling’s meticulous research provided scientifically credible evidence that has proved critical to understanding and addressing human impacts on our environment. Keeling recognized in 1960 that fossil fuels are driving global atmospheric change, which presents serious challenges for Earth and its people. The global impacts of climate change are what make Keeling’s work so important, and so celebrated, today.”

A previous designation ceremony took place April 30 at NOAA’s Mauna Loa Observatory in Hawaii, where Keeling Curve data are collected. In the 1950s, Keeling had been seeking key locations to continuously measure carbon dioxide in the atmosphere with a new analytical tool called an infrared gas analyzer. Harry Wexler, a scientist at the U.S. Weather Bureau, the predecessor to NOAA’s National Weather Service, suggested he conduct tests at the bureau’s Mauna Loa observatory.

Set up in 1956, the Mauna Loa Observatory offers a unique location 3,400 meters (11,135 feet) above sea level and far from most human influences to monitor sunlight and air. There Scripps and NOAA researchers continue to make complementary CO2 measurements. Scripps data are made public daily via the Keeling Curve website and Twitter feed.

“From our early days as Survey of the Coast and the U.S. Weather Bureau, NOAA has used a network of observational tools to keep a finger on the pulse of our changing planet,” said Richard Spinrad, NOAA’s chief scientist. “Charles David Keeling’s visionary research has been an instrumental tool in our ability to monitor, observe, and record the rise of carbon dioxide in our planet’s atmosphere and the implications that has on the earth’s overall health.”

The American Chemical Society established the National Historic Chemical Landmarks program in 1992 to recognize seminal events in the history of chemistry and to increase awareness of the contributions of chemistry to the well-being of society. Other subjects recognized through this program have included the development of synthetic plastics, the discovery of penicillin, and the work of notable figures such as Rachel Carson, Joseph Priestley, and George Washington Carver. For more information about the program, visit www.acs.org/landmarks.

The American Chemical Society is a nonprofit organization chartered by the U.S. Congress. With more than 158,000 members, ACS is the world’s largest scientific society and a global leader in providing access to chemistry-related research through its multiple databases, peer-reviewed journals, and scientific conferences. Its main offices are in Washington, D.C., and Columbus, Ohio.