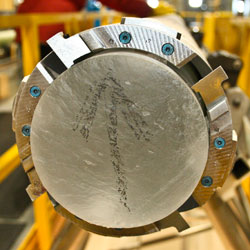 In a recent comment, a reader posted a graphic in which CO2 and sea-level rise appear to be correlated throughout the last 700,000 years. While these two factors do appear to rise and fall together, what drives these two factors over the period of 700,000 years is very different from those over the last 50 – 100 years. As a result, this correlation is not a reliable guide to the cause and effect relationship between CO2 and sea-level rise in recent years.

Until the Industrial Revolution, melting of snow and ice at the end of cyclical glacial periods was driven by changes in the Earth’s orbit. As snow and ice melted on the planet, the albedo, or reflectivity, of the earth declined, with land and ocean absorbing more heat from the sun (think the reflectivity of cars in a parking lot versus the hot blacktop of the parking lot itself). As the planet slowly warmed, a warmer and better-mixed ocean released CO2 into the atmosphere, which amplified the warming that was already in progress. In all, temperature typically increased by 6°C (11° F) over thousands of years during these interglacial periods, and one third of this increase was a result of the CO2 that outgassed from the ocean once warming began. Therefore, CO2 was not the initial cause of melting ice on the planet. It merely amplified a signal that was already in progress.

By contrast, as humans burn fossil fuels, we are creating a new driver of snow and ice melt and accompanying sea-level rise. This time, additional CO2 entering the atmosphere is coming from sources of carbon that had previously been sequestered in fuels such as oil and gas. We know from basic physics that CO2 traps heat. The phenomenon is perhaps best demonstrated by Earth’s neighbor Venus. If we lived on Venus, the computer you’re reading this post on now would be melting. That’s because Venus has 100,000 times the amount of CO2 in its atmosphere as Earth does and its average temperature of 462° C (863° F) is high enough to melt lead.

Thus, while in the past sea-level rise as a result of melting glaciers and thermal expansion was driven by changes in Earth’s orbit and amplified by oceanic CO2 released after initial warming, today anthropogenic CO2 is directly driving this melting and sea-level rise.