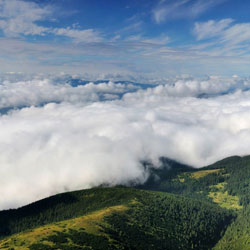 Tim Lueker, research scientist in the Scripps CO2 Research Group, only needs one sentence to explain why atmospheric CO2 peaks in May.

“Springtime comes in May in Siberia,” he says.

Let’s take a look at the details of this statement to reveal the processes that drive this annual May peak:

First, the significance of spring is related to the shift of terrestrial plants from barren winter branches to bountiful spring leaves.  After the leaves on the trees drop in the fall, the leaf litter and other dead plant material break down throughout the winter thanks to the hard work of microbes.  During this decomposition, microbes respire and produce CO2, contributing to atmospheric CO2 levels in the process.  Thus over the course of the winter, there is a steady increase in CO2 in the atmosphere.  In the spring, leaves return to the trees and photosynthesis increases dramatically, drawing down the CO2 in the atmosphere.  This shift between the fall and winter months to the spring and summer results in the sawtooth pattern of the Keeling Curve measurement of atmospheric CO2 such that every year there is a decline in CO2 during months of terrestrial plant photosynthesis and an increase in CO2 in months without large amounts of photosynthesis and with significant decomposition.

May is the turning point between all the decomposition throughout the winter months and the burst of photosynthesis that occurs with the return of leaves to the trees in spring. CO2 measurements all over the globe reflect this pattern of peak CO2 concentration occurring each May, regardless of the level of that peak.  Atmospheric CO2 has reached daily peaks of 400 parts per million for the first time this year as a result of the upward trend in CO2 overall, and the first monthly peak will likely occur in May.

Also, while photosynthesis in the ocean is also extremely important to atmospheric chemistry (phytoplankton being responsible for the air we breathe today), this marine photosynthesis does not drive the annual peak in atmospheric CO2 because little of the CO2 goes into the atmosphere.

That’s not to say that the entire peak depends on Siberia alone.  While Siberia is important because it is home to the largest area of boreal and temperate forests that drive the seasonal cycle, carbon dioxide exchange over North America is also very important to the cycle measured at Mauna Loa. The measurement at the observatory there does tend to lag the mainland as it can take a few weeks for seasonal swings to propagate to Mauna Loa’s latitude.

So, with the passing of May and the trees in Siberian forests and forests across the Northern Hemisphere showing their leaves, we’ve reached this year’s atmospheric peak in CO2.

Emily Kelly is a fifth-year student in the laboratory of Scripps marine biologist Jennifer Smith.