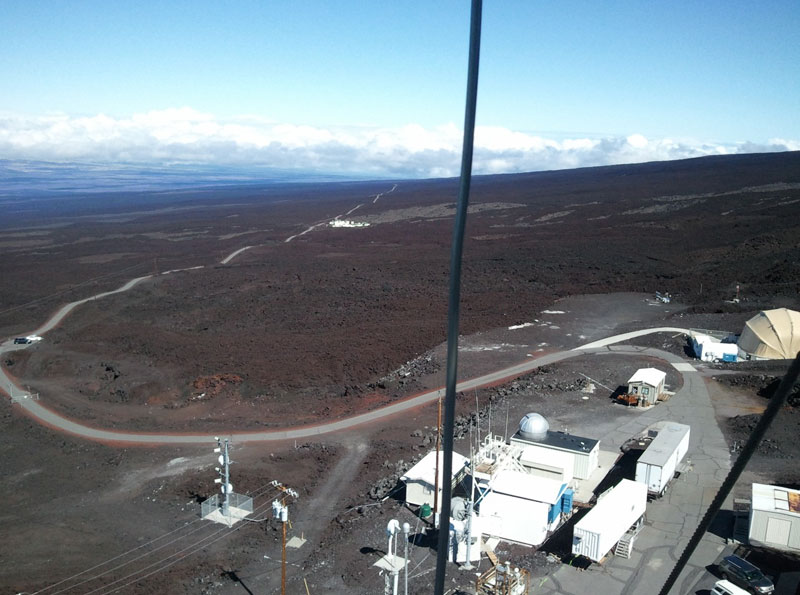 Peak carbon dioxide levels surpass 411 parts per million for May

Carbon dioxide levels measured at NOAA’s Mauna Loa Atmospheric Baseline Observatory exceeded 411 parts per million in May, the highest monthly average ever recorded, scientists from Scripps Institution of Oceanography at the University of California San Diego and NOAA announced today.

Primarily driven by fossil fuel combustion, increasing carbon dioxide levels are tracked closely by the world’s scientists as a measure of how human activity is changing the planet’s atmosphere. This year, the average for May peaked at 411.31 ppm, according to Scripps researchers. NOAA’s reading was 411.25 for the month.

From 2016 to 2017, the global CO2 average increased by 2.3 ppm — the sixth consecutive year-over-year increase greater than 2 ppm. Prior to 2012, back-to-back increases of 2 ppm or greater had occurred only twice.

“Many of us had hoped to see the rise of CO2 slowing by now, but sadly that isn’t the case,” said Ralph Keeling, director of the Scripps CO2 Program. “It could still happen in the next decade or so if renewables replace enough fossil fuels.”

Independent measurements of CO2 at Mauna Loa are made by scientists with NOAA’s Earth System Research Laboratory and Scripps Oceanography. Initiated by Scripps scientist Charles David Keeling at the NOAA weather station on Mauna Loa in 1958, continuous, on-site observations have been made for the past 60 years, with NOAA’s measurements beginning in 1974. Air samples are also shipped to NOAA’s Earth System Research Laboratory in Boulder, Colo. for verification, as well as further analysis.

The two research entities make redundant measurements at Mauna Loa as a means of quality control and to ensure the continuity of the record should one system or the other be unable to record data.

Charles Keeling was the first to recognize that CO2 levels have a distinct seasonal cycle driven by the Northern Hemisphere’s growing season. During the northern summer, plant growth removes enough CO2 from the atmosphere during photosynthesis to temporarily overcome the amount added by decaying vegetation and by fossil fuel consumption. During the northern fall, winter, and most of spring, CO2 levels rise as decaying vegetation and fossil fuels are turned back into CO2 gas, which is released back into the atmosphere.

“CO2 levels are continuing to grow at an all-time record rate because emissions from coal, oil, and natural gas are also at record high levels,” said Pieter Tans, lead scientist of NOAA’s Global Greenhouse Gas Reference Network. “Today’s emissions will still be trapping heat in the atmosphere thousands of years from now.”

The Mauna Loa observatory is ideally located for monitoring carbon dioxide and other greenhouse gases in the atmosphere. Situated at more than 11,000 feet above sea level in the middle of the Pacific Ocean, the site gives researchers the opportunity to sample air that has been well-mixed during its passage across the Pacific and, thanks to its altitude, is minimally influenced by local vegetation or local pollution sources. Though Kilauea volcano is 20 miles away from the observatory, influences from volcanic gases are also slight and screened out before daily readings are recorded.

Emissions from fossil-fuel consumption have remained at historically high levels since 2011 and are the primary reason atmospheric CO2 levels are increasing at a dramatic rate, Tans said. This high growth rate of CO2 is also being observed at other sites in NOAA’s Global Greenhouse Gas Reference Network.

“If the current rate of increase holds steady for another two decades, global CO2 will likely be well past 450 ppm in 2038,” Tans said.