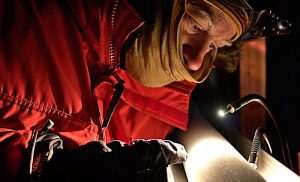 A new multi-institutional study including Scripps Institution of Oceanography, UC San Diego, shows that the rise of atmospheric carbon dioxide that contributed to the end of the last ice age more than 10,000 years ago did not occur gradually, but was characterized by three “pulses” in which CO2 rose abruptly.

Scientists are not sure what caused these abrupt increases, during which levels of carbon dioxide, a greenhouse gas, rose about 10-15 parts per million (ppm) – or about five percent per episode – over a period of one to two centuries. It likely was a combination of factors, they say, including ocean circulation, changing wind patterns, and terrestrial processes. Scripps geoscientist Jeff Severinghaus said the three episodes, which took place 16,100 years ago, 14,700 years ago, and 11,700 years ago are strongly linked to abrupt climate change events that took place in the Northern Hemisphere.

“Abrupt climate change has its own small but significant impacts on atmospheric CO2 and no one knew that before now,” said Severinghaus, a study co-author.

Results of the National Science Foundation-funded study appear today in the journal Nature.

“We used to think that naturally occurring changes in carbon dioxide took place relatively slowly over the 10,000 years it took to move out of the last ice age,” said Shaun Marcott, lead author on the article who conducted his study as a postdoctoral researcher at Oregon State University. “This abrupt, centennial-scale variability of CO2 appears to be a fundamental part of the global carbon cycle.”

Some previous research has hinted at the possibility that spikes in atmospheric carbon dioxide may have accelerated the last deglaciation, but that hypothesis had not been resolved, the researchers say. The key to the new finding is the analysis of an ice core from the West Antarctic that provided the scientists with a detailed enough record to be able to see changes on fine time scales. The core was retrieved ­– with difficulty – from a region in which snow accumulated and compacted at a rate of 25 centimeters per year. That meant the ice core preserved a more detailed record from the gas bubbles trapped in the ice than did other cores from Antarctic regions where only 2 centimeters of ice represent a year.

Severinghaus said the new cores, collected during the recently concluded multi-year WAIS Divide field project, came from a part of Antarctica so snowy that researchers’ camps were frequently buried in snowdrifts.

Coring in that location is “not an easy thing to do, so that’s why it wasn’t done before,” Severinghaus said.

The new core from West Antarctica, drilled to a depth of 3,405 meters (11,170 feet) in 2011 and spanning the last 68,000 years, has “extraordinary detail,” said Oregon State paleoclimatologist Edward Brook, a co-author on the Nature study and an internationally recognized ice core expert.

“It is a remarkable ice core and it clearly shows distinct pulses of carbon dioxide increase that can be very reliably dated,” Brook said. “These are some of the fastest natural changes in CO2 we have observed, and were probably big enough on their own to impact the Earth’s climate.”

“The abrupt events did not end the ice age by themselves,” Brook added. “That might be jumping the gun a bit. But it is fair to say that the natural carbon cycle can change a lot faster than was previously thought – and we don’t know all of the mechanisms that caused that rapid change.”

The researchers say that the increase in atmospheric CO2 from the peak of the last ice age to complete deglaciation was about 80 parts per million, taking place over 10,000 years. Thus, the finding that 30-45 ppm of the increase happened in just a few centuries was significant.

The rate of change during these events is still significantly less than present-day changes in atmospheric CO2 concentrations. The Keeling Curve record of atmospheric carbon dioxide, launched by the late Scripps geochemist Charles David Keeling, recorded levels of 315 ppm when it began in 1958. In 2014, monthly average concentrations reached 401 ppm, an increase of more than 85 parts per million in less than 60 years.

The overall rise of atmospheric carbon dioxide during the last deglaciation was thought to have been triggered by the release of CO2 from the deep ocean – especially the Southern Ocean. But the century-scale events must involve a different mechanism that can act faster, said Severinghaus. One possibility is a major increase in the winds that blow around Antarctica, which are known to bring up CO2 from mid-depths and cause it to outgas into the atmosphere.