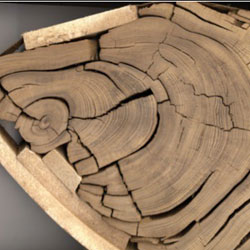 As atmospheric carbon dioxide levels rise, scientists look back four million years for answers on what to expect from climate

The Pliocene is the geologic era between five million and three million years ago. Scientists have come to regard it as the most recent period in history when the atmosphere’s heat-trapping ability was as it is now and thus as our guide for things to come.

Recent estimates suggest CO2 levels reached as much as 415 parts per million (ppm) during the Pliocene. With that came global average temperatures that eventually reached 3 or 4 degrees C (5.4-7.2 degrees F) higher than today’s and as much as 10 degrees C (18 degrees F) warmer at the poles. Sea level ranged between five and 40 meters (16 to 131 feet) higher than today.

As for what life was like then, scientists rely on fossil records to recreate where plants and animals lived and in what quantity. Pliocene fossil records show that the climate was generally warmer and wetter than today.  Maps of Pliocene vegetation record forests growing on Ellesmere Island in the Canadian Arctic, and savannas and woodlands spreading over what is now North African desert. Both the Greenland and Antarctic ice sheets were smaller than today during the warmest parts of the Pliocene.

In the oceans, fossils mark the spread of tropical and subtropical marine life northward along the U.S. Eastern Seaboard.  Both observations and models of the Pliocene Pacific Ocean show the existence of frequent, intense El Niño cycles—a climatic oscillation that today delivers heavy rainfall to the western U.S. causing both intense flooding but also increasing the river flows needed to sustain salmon runs. The absence of significant ocean upwelling in the warmest part of the Pliocene would have suppressed fisheries along the west coasts of the Americas, and deprived seabirds and marine mammals of food supplies.  Reef corals suffered a major extinction during the peak of Pliocene warmth but reefs themselves did not disappear.

Richard Norris, a geologist at Scripps Institution of Oceanography, UC San Diego, said the concentration of CO2 is one means of comparison, but what is not comparable, and more significant, is the speed at which 400 ppm is being surpassed today.

“I think it is likely that all these ecosystem changes could recur, even though the time scales for the Pliocene warmth are different than the present,” Norris said.  “The main lagging indicator is likely to be sea level just because it takes a long time to heat the ocean and a long time to melt ice. But our dumping of heat and CO2 into the ocean is like making investments in a pollution ‘bank,’ since we can put heat and CO2 in the ocean, but we will only extract the results (more sea-level rise from thermal expansion and more acidification) over the next several thousand years.  And we cannot easily withdraw either the heat or the CO2 from the ocean if we actually get our act together and try to limit our industrial pollution–the ocean keeps what we put in it.”

Scientists can analyze the gases trapped in ice to reconstruct with high accuracy what climate was like in prehistory, but that record only goes back 800,000 years. It is trickier to estimate carbon dioxide levels before then, but in 2009, one research team reported finding evidence of carbon dioxide levels ranging between 365 and 415 ppm roughly 4.5 million years ago. They based their finding on the analysis of carbon isotopes present in compounds made by tiny marine phytoplankton preserved in ancient ocean sediments.

That estimate made Earth’s last experience of 400 ppm a much more recent event than scientists have commonly thought. There has been broader consensus that carbon dioxide concentrations have been much higher than today’s but not for tens of millions of years. The assertion that Earth passed the 400 ppm mark a mere 4.5 million years ago has been supported by other analyses, many of which also concluded that the temperatures at that time were higher than previously estimated.  These studies suggest that the traditional way scientists currently rate Earth’s long-term sensitivity to extra doses of CO2 might not sufficiently take into account the slower effects of climate change on the sunlight-absorbing properties of the planet, such as ice sheet melt and changes in plant cover on land.

What that means is that Earth might react even more strongly to the increases in CO2 measured by the Keeling Curve. Several prominent questions remain to be answered, though, before accurate scenarios can be created. The extreme speed at which carbon dioxide concentrations are increasing is unprecedented. An increase of 10 parts per million might have needed 1,000 years or more to come to pass during ancient climate change events. Now the planet is poised to reach the 1,000 ppm level in only 100 years if emissions trajectories remain at their present level.

“Our grandchildren will inhabit a radically altered planet, as the ocean gradually warms up in response to the buildup of heat-trapping gases,” said Scripps Institution of Oceanography, UC San Diego geoscientist Jeff Severinghaus.

This website provides daily updates, analysis, and information on the state of climate. Follow @Keeling_curve to get daily updates of the CO2 value. Through this site, the public can also help support the continuation of the iconic Keeling Curve and of complementary measurements of atmospheric oxygen made at Scripps. These measurements enable society to witness climate change and inform strategies to address it. Click below to go to the UC San Diego giving fund set up specifically to fund ongoing operations.