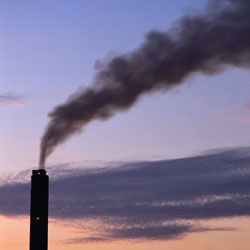 In May 2013, for the first time since accurate measurements of atmospheric carbon dioxide amounts began in 1958, a daily value of 400 parts per million (ppm) was observed at Mauna Loa in Hawaii, the site of the longest continuous observational CO2 record. The Keeling Curve, the famous graph of monthly average CO2 values established at Scripps Institution of Oceanography, UC San Diego, soon will decline as it does every summer but next year it will rise higher still. The annual growth rate of the Keeling Curve has been roughly 2 ppm every year averaged over the last decade, and that growth rate gets faster as well every decade because human emissions of CO2 each year have been more than the previous 10-year span.  At this pace, we will reach 450 ppm well before year 2038.

Is it dangerous for CO2 levels to be this high?

We know that excess CO2 is contributing to the human-caused increase in the greenhouse effect and is thus warming the planet.  There is some uncertainty as to just how much warming would be associated with any given amount of atmospheric CO2, and there is considerable subjectivity in deciding what level of warming should be considered dangerous. Many governments throughout the world have agreed that global warming should be limited to no more than 2º C (3.6º F) above the average pre-industrial temperatures of the 1800s. A recent authoritative report concluded that a level of CO2 between 370 and 540 ppm has a 66 percent probability of keeping the world within this 2º C limit on warming, with a best estimate of 430 ppm. There is also a time lag for the global temperature to catch up with the CO2 that humans have already added to the atmosphere, so temperatures will continue to rise for many years after the atmospheric CO2 amount is stabilized.  Plus, we aren’t sure that limiting warming to 2°C is “safe,” at least not for everyone on the planet.

What would it take to stop the Keeling Curve from going up further?

It is a well-established fact that atmospheric CO2 is rising at roughly 55 percent of the rate expected from fossil-fuel emissions.  From this fact, we know that to stop CO2 in its tracks at 400ppm, we’d need to cut fossil-fuel emissions immediately by 55 percent.  At that point, the remaining emissions would be exactly counteracted by natural “sinks” that are removing CO2 from the atmosphere. The main sinks are the oceans, which absorb CO2 as it dissolves in seawater, and land plants, which convert the carbon in CO2 into relatively long-lived storage pools such as wood or soil organic matter. These sinks are acting like a sponge that is soaking up some of the extra CO2. Over time these sinks would slowly saturate as they come into balance with the 400 ppm in the air, and additional cuts would then be needed to match the decreasing sink capacities.  By 2060, we’d have to cut emissions to below 20 percent of current levels.

An immediate cut in fossil-fuel emissions by 55 percent is clearly not even remotely possible, so CO2 will continue its relentless rise.  Keeping CO2 below 450 ppm will also be very difficult, as this will require immediately leveling off of fossil fuel emissions and then cutting emissions to below 30 percent of present levels over the next 50 years or so.  If nothing is done to reduce the dependence on fossil fuels, CO2 could keep rising for centuries, depending on the amount of coal, natural gas, oil, and any new forms of fossil fuels that are extractable. By some estimates, the ultimate resource of fossil fuels may be large enough that CO2 will rise as high as 1,600 ppm before fossil fuels are fully depleted.  This would be sufficient to cause the world to warm between 4 to 10° C (7 to 18° F) with unimaginable consequences.