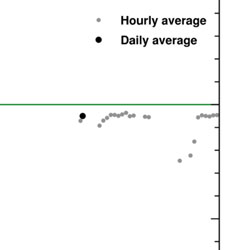 Many readers noticed that there were several days without readings recently. A problem occurred on Friday, April 26, when a computer failure late in the afternoon resulted in some data loss until repairs were made on the morning of April 29.  Daily average estimates for April 27 and 28 were therefore not determined.

Problems with the hardware, software or data transmission from Mauna Loa to Scripps may occasionally result in the temporary or permanent loss of CO2 data.  Lost data will result in gaps appearing in plots of co2 concentrations as well as possible delays in posting updates.

Hardware failures require intervention of personnel at the NOAA facility at Mauna Loa. However, with the laboratory being in such a remote location, personnel are typically only available to make adjustments during working hours on weekdays. Therefore, if a hardware problem occurs during the weekend, data covering several days can be permanently lost.

Network problems also occasionally interfere with the raw data transmission to Scripps, temporarily resulting in a delay in receiving daily updates. However, since the data is permanently stored on the control PC at Mauna Loa, missing data is automatically re-sent during the next data transmission once network connection resumes so that these data are not permanently lost. Thus apparently missing data from the end of the record may be restored later once data connection resumes.