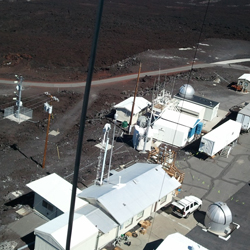 Instruments at the Mauna Loa Observatory in Hawaii recorded atmospheric levels of carbon dioxide greater than 400 parts per million on March 12, 2014 nearly two months earlier than the date on which the milestone was passed in 2013.

Scripps Institution of Oceanography, UC San Diego, reported a reading of 401.62 ppm on March 12 and a reading of 400.2 on March 13. Readings by instruments operated by NOAA also exceeded 400 ppm on those days.

Ralph Keeling, director of the CO2 and O2 measurement programs at Scripps, said that the next significant milestone to be passed will be monthly averages in excess of 400 ppm. Fossil fuel burning continues to increase concentrations of the greenhouse gas to levels not seen in human history and not in perhaps as many as 3 to 5 million years.

“We’re already seeing values over 400,” said Keeling. “Probably we’ll see values dwelling over 400 in April and May. It’s just a matter of time before it stays over 400 forever.”