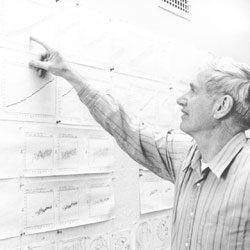 Carbon dioxide is a greenhouse gas produced by natural processes and everyday human activities, especially the burning of fossil fuels. The Keeling Curve is a measurement of the concentration of carbon dioxide in the atmosphere made atop Hawaii’s Mauna Loa since 1958. It is the longest-running such measurement in the world.

The Scripps CO2 program was initiated in 1956 by Charles David Keeling and operated under his direction until his death in 2005. It is currently being continued by Ralph F. Keeling, who also runs a parallel program at Scripps to measure changes in atmospheric oxygen abundances. Carbon dioxide measurements at Mauna Loa are also being made by an independent instrument operated by NOAA.

In the first part of the 20th century it was suspected that the concentration of atmospheric CO2might be increasing in the atmosphere due to fossil fuel combustion. However there were relatively few measurements of this gas and the measurements varied widely.

In 1953 Charles (Dave) David Keeling began a post doctoral position at Caltech, Pasadena, California under Professor Harrison Brown. His initial project was aimed at extracting uranium from granite rock with applications in the nuclear power industry. He never really started this project but with encouragement from Professor Brown became involved in another project investigating the equilibria between carbonate in surface waters, limestone and atmospheric CO2. This involved the construction of a precision gas manometer to measure CO2 extracted from the air as well as acidified samples of water.

Dave Keeling found significant variations in CO2 concentration in Pasadena, probably due to industry, and later took his sampling equipment to Big Sur near Monterey. There he began to take air samples throughout the day and night and soon detected an intriguing diurnal pattern. The air contained more CO2 at night than during the day and after correcting for the effects of water vapor, had about the same amount of CO2 every afternoon, 310 ppm. He used stable isotope ratio mass spectrometry measurements of the CO2 he extracted to show that the 13C/12C ratio in CO2at night was smaller than during the day and a function of plant respiration.

He repeated these measurements in the rain forests of Olympic peninsula and high mountain forests in Arizona. Everywhere the data were the same:  strong diurnal behaviour with steady values of about 310 ppm in the afternoon. The explanation for the results came from a book on meteorology describing diurnal patterns in turbulence in the atmosphere. In the afternoon Dave Keeling was measuring CO2 concentrations representative of the “free atmosphere,” concentrations that prevailed over a large part of the northern hemisphere. At night time with a lower boundary layer the CO2 concentration was heavily influenced by respiration from local plants and soils.

Little did Dave Keeling know then that he had laid the basis for his remarkable career investigating the global behavior of atmospheric CO2.

In 1956 Dave Keeling’s measurements came to the attention of Harry Wexler at the U.S. weather bureau and Roger Revelle at Scripps Institution of Oceanography. To both these organizations he proposed a global program based on infrared gas analyzers to measure the atmospheric CO2 concentration at several remote locations around the world including the South Pole station and at Mauna Loa in Hawaii. The proposal was supported by and became one of the features of the International Geophysical Year (IGY) beginning in July 1957 and ending in December 1958.

Using IGY funds from the Weather Bureau, Dave Keeling bought four infrared gas analyzers from the Applied Physics Corporation. One of these was installed at Mauna Loa in March 1958 and on the first day of operation recorded an atmospheric CO2 concentration of 313 ppm.

To Dave Keeling’s surprise, however, the CO2 concentration at Mauna Loa had risen by 1ppm in April 1958 to a maximum in May when it began to decline reaching a minimum in October. After this the concentration increased again and repeated the same seasonal pattern in 1959. In Dave Keeling’s words “We were witnessing for the first time nature’s withdrawing CO2 from the air for plant growth during summer and returning it each succeeding winter.” In 1959 the average concentration had increased and increased still further in 1960 as shown in the graph.

Dave Keeling’s analytical skills and dedication had paid off with two dramatic discoveries: Firstly, of the natural seasonal “breathing” of the planet and secondly, of the rise in atmospheric CO2 due to the combustion of fossil fuels by industry and to land use changes. Published in the 1960 Tellus Article, “The concentration and isotopic abundances of carbon dioxide in the atmosphere” (pdf), these significant findings marked the beginning of the now world famous “Keeling Curve” which extends for 55 years and represents one of the most important geophysical records ever made.

By the early 1970s this curve was getting serious attention, and played a key role in launching a research program into the effect of rising CO2 on climate. Since then, the rise has been relentless and shows a remarkably constant relationship with fossil-fuel burning, and can be well accounted for based on the simple premise that 57 percent of fossil-fuel emissions remain airborne.

The Mauna Loa record can now be placed in the context of the variations in CO2 over the past 400,000 years, based on reconstructions from polar ice cores. During ice ages, the CO2 levels were around 200 ppm, and during the warmer interglacial periods, the levels were around 280 ppm.

Looking ahead, if the rate of fossil-fuel burning continues to rise on a business-as-usual trajectory, such that humanity exhausts the reserves over the next few centuries, CO2 will continue to rise to levels of order 1500 ppm. The atmosphere will not return to pre-industrial levels even tens of thousands of years into the future. Unless serious efforts are made to reduce the dependence on fossil fuels, it is clear that we are on a threshold of a new era of geologic history, one with climate very different from that of our ancestors. These curves not only demonstrate the seriousness of the global warming problem, but also illustrate the power of continuous time series to communicate and clarify the essential science.

The Scripps Institution of Oceanography program was actually shut down for a period in 1964 following congressionally mandated budget cuts, and would have been discontinued at that time had Charles David Keeling not pushed hard to keep it going. The program had to endure a series of threats through the 1970s and 1980s associated with a coordinated effort by program officers at NSF and NOAA to transfer full responsibility for global CO2 observations to NOAA. The program was rescued by DOE, but was never on a very secure footing and was subject to occasionally bizarre requirements, such as a “mandated convergence” with NOAA and a the requirement that new discoveries be made based on the records at a pace of two per year.

For the last several decades, the Scripps Institution of Oceanography program has coexisted peacefully alongside a much larger effort by NOAA. Having two programs is arguably very important for long-term continuity. All programs will suffer occasion technical difficulties and are vulnerable to budget cuts. Also, when tracking changes in time, you only get one chance to measure each point. Redundancy is therefore an essential element of any robust long-term measurement program.